Paxos and Replicated log implementations also have two phases of execution.
But the key difference is that these consensus algorithms are used when
all the cluster nodes involved store the same values.

Two phase commit works across cluster nodes storing different values.
For example, across different partitions of a database.
Each partition can be using Replicated Log to replicate
the state involved in two phase commit.

The essence of two phase commit, unsurprisingly, is that it carries out an
update in two phases:

Before storing any value, the client communicates with the coordinator to notify
it about the start of the transaction.
Because the coordinator is one of the cluster nodes storing values,
it is picked up dynamically when the client initiates a get or put operation
with a specific key.

The transaction coordinator keeps track of the status of the transaction.
It records every change in a Write-Ahead Log to make sure
that the details are available in case of a crash.

The keys then can be used to know about all the cluster nodes which are
part of the transaction. Because each key-value is generally replicated with
Replicated Log, the leader server handling the requests
for a particular key might change over the life time of the transaction, so
keys are tracked, rather than the actual server addresses.

The write locks can be taken only when the transaction is about to commit
and the values are to be made visible in the key value store. Until then, the
cluster node can just track the modified values as pending operations.

Usage of locks can cause deadlocks where two transactions wait for
each other to release the locks. Deadlocks can be avoided if transactions
are not allowed to wait and aborted when the conflicts are detected.
There are different strategies used to decide which transactions are
aborted and which are allowed to continue.

The lock manager implements these wait policies as follows:

The WaitPolicy decides what to do when there are conflicting requests.

The lock is an object which tracks the transactions which currently
own the lock and the ones which are waiting for the lock.

When a transaction requests to acquire a lock, the lock manager grants
the lock immediately if there are no conflicting transactions already
owning the lock.

If there are conflicts,
the lock manager acts depending on the wait policy.

If the wait policy is to error out, it will throw an error and the calling
transaction will rollback and retry after a random timeout.

In case of contention when there are a lot of user transactions
trying to acquire locks, if all of them need to restart, it severely
limits the systems throughput.
Data stores try to make sure that there are minimal transaction restarts.

But in distributed systems,

One of the key things to notice is that if the transaction owning
the lock is already in the prepared state of two-phase-commit, it is
not aborted.

Wound-wait mechanism generally has
fewer restarts
compared to the wait-die method.
So data stores like Spanner use the wound-wait
method.

When the owner of the transaction releases a lock,
the waiting transactions are granted the lock.

Once the client successfully reads without facing any conflicts and
writes all the key values, it initiates the commit request by sending
a commit request to the coordinator.

The cluster node receiving the prepare requests do two things:

If it can successfully do these,
it can guarantee that there are no conflicting transactions,
and even in the case of a crash the cluster node can recover all the
required state to complete the transaction.

When the cluster node receives the commit message from the coordinator,
it is safe to make the key-value changes visible.
The cluster node does three things while committing the changes:

The rollback is implemented in a similar way. If there is any failure,
the client communicates with the coordinator to rollback the transaction.

The cluster nodes receiving the rollback request does three things:

In case of network failures, the coordinator can retry calls to
prepare, commit or abort. So these operations need to be
idempotent.

Consider the following scenario. Paula Blue has a truck and Steven Green
has a backhoe.
The availability and the booking status of the truck and the backhoe
are stored on a distributed key-value store.
Depending on how the keys are mapped to servers,
Blue’s truck and Green’s backhoe bookings are stored on
separate cluster nodes.
Alice is trying to book a truck
and backhoe for the construction work she is planning to start on a Monday.
She needs both the truck and the backhoe to be available.

The booking scenario happens as follows.

If the values are empty, the booking is free.
She reserves the truck and the backhoe.
It is important that both the values are set atomically.
If there is any failure, then none of the values is set.

The commit happens in two phases. The first server Alice
contacts acts as the coordinator and executes the two phases. 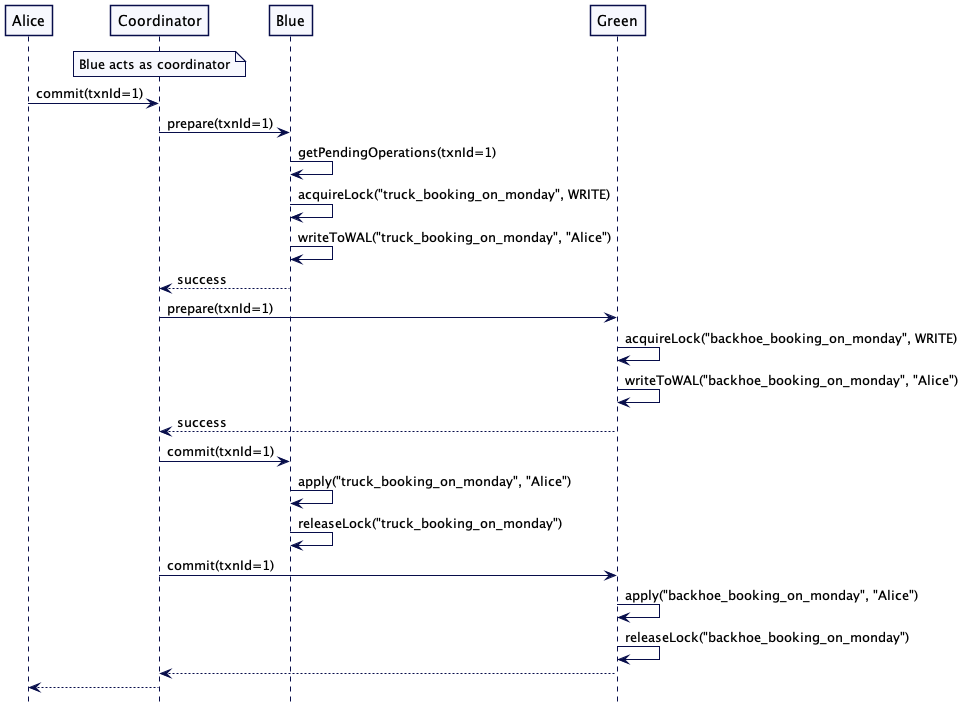 The coordinator is a separate participant in the
protocol, and is shown that way on the sequence diagram. However
usually one of the servers (Blue or Green) acts as
the coordinator, thus playing two roles in the interaction.

Consider a scenario where another person, Bob, is also trying to book a
truck and backhoe for construction work on the same Monday.

The booking scenario happens as follows:

The expectation is that, only Alice or Bob, should be able to book,
because the transactions are conflicting.
In case of errors, the whole flow needs to be retried and hopefully,
one will go ahead with the booking.
But in no situation, should booking be done partially.
Either both bookings should be done or neither is done.

When Alice and Bob decide to commit the transactions-
assuming that Blue acts as a coordinator- it triggers the two-phase
commit protocol and sends the prepare requests to itself and Green.

For Alice’s request it tries to grab a write lock for the key ‘truck_booking_on_monday’, which
it can not get, because there is a conflicting read lock grabbed by
another transaction. So Alice’s transaction fails in the prepare phase.
The same thing happens with Bob’s request. 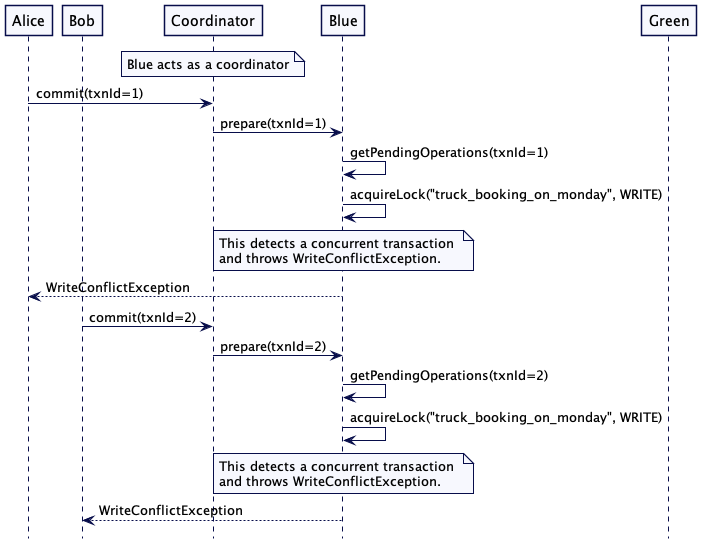 Transactions can be retried with a retry loop as follows:

The example booking code for Alice and Bob will look as follows:

In this case one of the transactions will eventually succeed and
the other will back out.

It is very constraining to have conflicts for all the read and write
operations, particularly so when the transactions can be read-only.
It is optimal if read-only transactions can work without holding any
locks and still guarantee that the values read in a transaction
do not change with a concurrent read-write transaction.

Data-stores generally store multiple versions of the values,
as described in Versioned Value.
The version used is the timestamp following Lamport Clock.
Mostly a Hybrid Clock is used in databases like
MongoDB or CockroachDB.
To use it with the two-phase commit protocol, the trick is that every server
participating in the transaction sends the timestamp it can write the
values at, as response to the prepare request.
The coordinator chooses the maximum of these timestamps as a
commit timestamp and sends it along with the value.
The participating servers then save the value at the commit timestamp.
This allows read-only requests to be executed without holding locks,
because it's guaranteed that the value written at a particular timestamp
is never going to change.

Consider a simple example as follows. Philip is running a report to read
all of the bookings that happened until timestamp 2. If it is a long-running
operation holding a lock, Alice, who is trying to book a truck, will be blocked
until Philip's work completes. With Versioned Value
Philip's get requests, which are part of a read-only operation, can continue
at timestamp 2, while Alice's booking continues at timestamp 4. 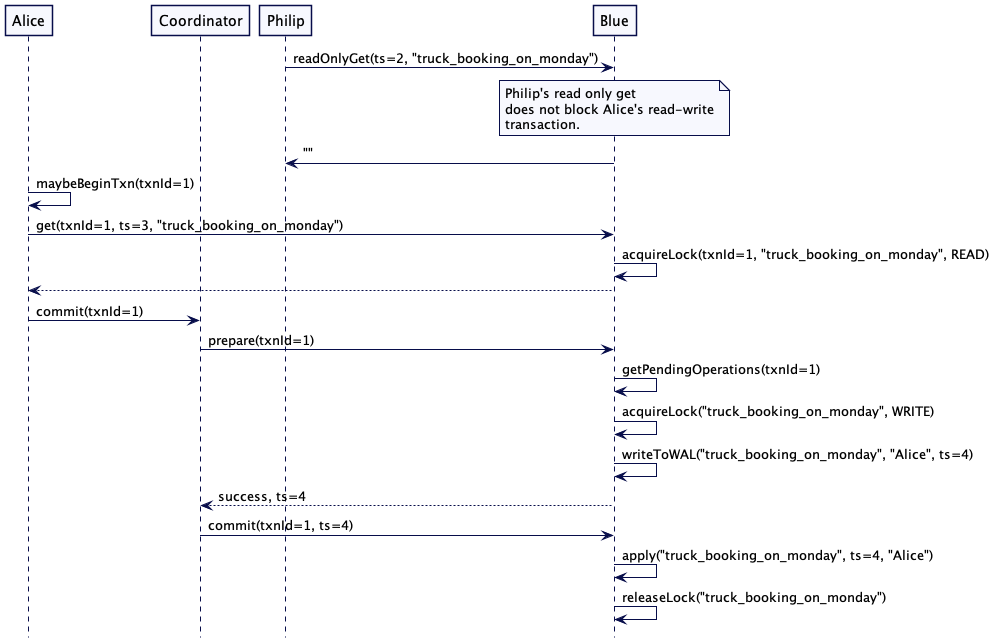 Note that read requests which are part of a read-write transaction,
still need to hold a lock.

The example code with Lamport Clock looks as follows:

All the participating cluster nodes then store the key-values at the
commit timestamp.

There is another subtle issue to be tackled here.
Once a particular response is returned at a given timestamp,
no write should happen at a lower timestamp than the one received in
the read request.
This is achieved by different techniques.
Google Percolator and
datastores like TiKV inspired by
Percolator use a separate server called Timestamp oracle which is
guaranteed to give monotonic timestamps.
Databases like MongoDB or CockroachDB
use Hybrid Clock to
guarantee it because every request will adjust the hybrid clock
on each server to be the most up-todate. The timestamp is also
advanced monotonically with every write request.
Finally, the commit phase picks up the maximum timestamp across the set
of participating servers, making sure that the write will always
follow a previous read request.

Considering the example of Alice and Bob in the above section,
the Blue servers will be a group of servers, so are the Green servers.
All the booking data will be replicated across a set of servers.
Each request which is part of the two-phase commit goes to the leader
of the server group. The replication is implemented using
Replicated Log.

The client communicates with the leader of each server group.
The replication is necessary only when the client decides to commit the
transaction, so it happens as part of the prepare request.

The coordinator replicates every state change to replicated log as well.

In a distributed datastore, each cluster node handles multiple partitions.
A Replicated Log is maintained per partition.
When Raft is used as part of replication it's sometimes
referred to as multi-raft.

Client communicates with the leader of each partition participating in
the transaction.

The coordinator needs to remember the state of the transactions
even in case of a process crash.

Coordinator uses Write-Ahead Log to record every update
to the state of the transaction.
This way, when the coordinator crashes and comes back up,
it can continue to work on the transactions which are incomplete.

The client can fail before sending the commit message to the coordinator.

The transaction coordinator tracks when each transaction state was updated.
If no state update is received in a timeout period, which is configured,
it triggers a transaction rollback.

The solution outlined here demonstrates the two-phase commit implementation
in a homogenous system. Homogenous meaning all the cluster nodes are part
of the same system and store same kind of data. For example
a distributed data store like MongoDb or a distributed message broker
like Kafka.

As seen in the above sections, the fault tolerance of the coordinator
plays a critical role in two-phase commit implementation. In case of XA
transactions the coordinator is mostly the application process making
the database and message broker calls. The application in most modern
scenarios is a stateless microservice which is running in a containerized
environment. It is not really a suitable place to put the responsibility
of the coordinator. The coordinator needs to maintain state and recover
quickly from failures to commit or rollback, which is difficult to
implement in this case.

This is the reason that while XA transactions seem so attractive, they
often run into issues
in practice and are avoided. In the microservices
world, patterns like [transactional-outbox] are preferred over
XA transactions.

On the other hand most distributed storage systems implement
two-phase commit across a set of partitions, and it works well in practice.