by admin
in Software Engineering


We’re excited to announce that the ability to prebuild codespaces is now generally available. As a quick recap, a prebuilt codespace serves as a “ready-to-go” template where your source code, editor extensions, project dependencies, commands, and configurations have already been downloaded, installed, and applied, so that you don’t have to wait for these tasks to finish each time you create a new codespace. This helps significantly speed up codespace creations–especially for complex or large codebases.

Codespaces prebuilds entered public beta earlier this year, and we received a ton of feedback around experiences you loved, as well as areas we could improve on. We’re excited to share those with you today.

How Vanta doubled its engineering team with Codespaces

With Codespaces prebuilds, Vanta was able to significantly reduce the time it takes for a developer to onboard. This was important, because Vanta’s Engineering Team doubled in size in the last few months. When a new developer joined the company, they would need to manually set up their dev environment; and once it was stable, it would diverge within weeks, often making testing difficult.

“Before Codespaces, the onboarding process was tedious. Instead of taking two days, now it only takes a minute for a developer to access a pristine, steady-state environment, thanks to prebuilds,” said Robbie Ostrow, Software Engineering Manager at Vanta. “Now, our dev environments are ephemeral, always updated and ready to go.”

Repository admins can now decide how and when they want to update prebuild configurations based on their team’s needs. While creating or updating prebuilds for a given repository and branch, admins can choose from three available triggers to initiate a prebuild refresh:

With increased control, repository admins can make more nuanced trade-offs between “environment freshness” and Actions usage. For example, an admin working in a large organization may decide to update their prebuild configuration every hour rather than on every push to get the most economy and efficiency out of their Actions usage. 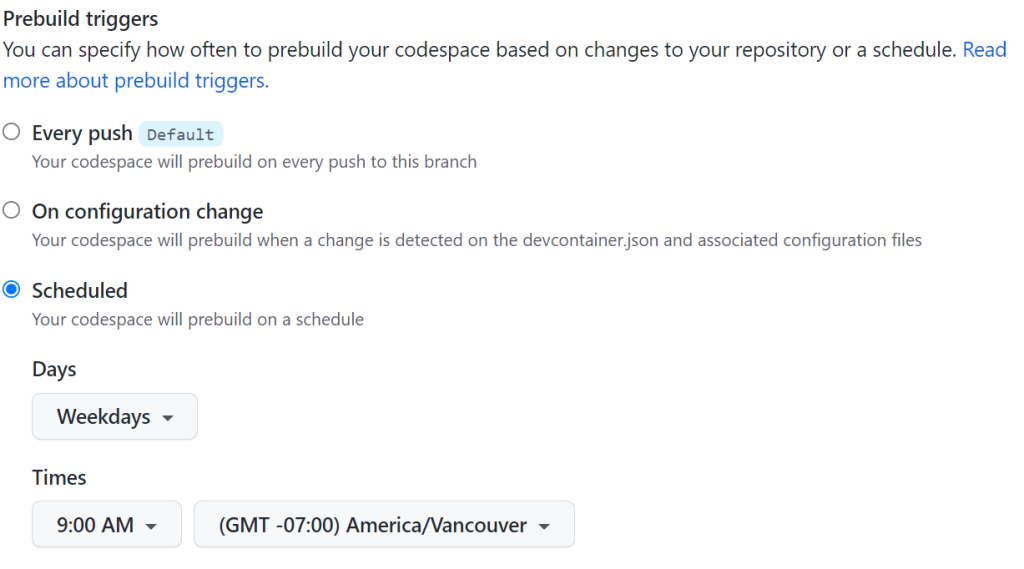 Many of you shared with us the need to be notified when a prebuild workflow fails, primarily to be able to watch and fix issues if and when they arise. We heard you loud and clear and have added support for failure notifications within prebuilds. With this, repository admins can specify a set of individuals or teams to be informed via email in case a workflow associated with that prebuild configuration fails. This will enable team leads or developers in charge of managing prebuilds for their repository to stay up to date on any failures without having to manually monitor them. This will also enable them to make fixes faster, thus ensuring developers working on the project continue getting prebuilt codespaces.

To help with investigating failures, we’ve also added the ability to disable a prebuild configuration in the instance repository admins would like to temporarily pause the update of a prebuild template while fixing an underlying issue.

Lastly, to help you identify prebuild-enabled machine types to avail fast creations, we have introduced a ‘prebuild in progress’ label in addition to the ‘prebuild ready’ label in cases where a prebuild template creation for a given branch is in progress.

Alongside enabling billing, we’ve also added a functionality to help manage prebuild-associated storage costs based on the valuable feedback that you shared with us.

Prebuilds are generally available for the GitHub Enterprise Cloud and GitHub Team plans as of today.

As an organization or repository admin, you can head over to your repository’s settings page and create prebuild configurations under the “Codespaces” tab. As a developer, you can create a prebuilt codespace by heading over to a prebuild-enabled branch in your repository and selecting a machine type that has the “prebuild ready” label on it.

Here’s a link to the prebuilds documentation to help you get started!

Post general availability, we’ll continue working on functionalities to enable prebuilds on monorepos and multi-repository scenarios based on your feedback. If you have any feedback to help improve this experience, be sure to post it on our GitHub Discussions forum.

Why Now is the Time to Invest in Customer Success

Skilling up to architect: What you need to land high-paying IT roles

What is Gross Revenue? [+ How to Calculate & Record It]

What is Web 3.0 and Why it Matters for Your Business?